Rachel Cummins, 8th grader and daughter of  Casa Chirilagua board member Wayne Cummins and wife Lisa Trevino Cummins, began volunteering with Kids Club in the fall of 2010. As a 7th grader she approached the group with a bit of timidity recognizing the small age gap between herself and the Kids Club students.  However, it didn’t take Rachel long to find her confidence, maturity and her role in the midst of the Kids Club family. She began by volunteering once a week and then began showing up a few times a week including Fun Fridays and Field Trips. The staff took notice of her connection to the kids and the amount of responsibility she was capable of handling at such a young age.

Over this summer, Rachel was one of Casa Chirilagua’s most faithful volunteers, coming to Kids Club almost every day. There were some very real sacrifices that she chose to make in order to be so committed to Kids Club.  Most teenagers choose to spend their summer breaks sleeping in, hanging out with their friends, and lounging around the house to enjoy their break from school.  However, Rachel got up early and was at Kids Club almost every morning at 9:00 AM. She passed up opportunities to attend camps for her favorite sport, soccer. Additionally, summer is generally the time of the year in which she makes most of her “clothing money” for the year. However, she gave-up babysitting and other work opportunities to volunteer at Kids Club. 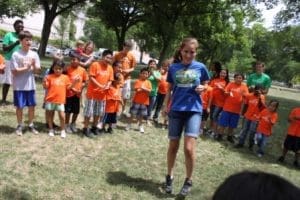 Rachel’s father commented, “Kids Club is one of those things Rachel looks forward to doing. It isn’t an option on her calendar; it is a priority, and I have a feeling that it will be for years to come.  She gets a lot of satisfaction from spending time with the kids. We (her mother and I) are grateful for the growth she is experiencing from being a part of this ministry.”

Casa Chirilagua is very thankful for Rachel Cummins and her dedication to the children of Kids Club. She is a top notch student leader, and we hope to find more student volunteers like her. We recognize the personal sacrifices she is making to be a part of this ministry and for this we are naming her the August Casa Chirilagua Volunteer of the Month.